This report is supposed to be about NDS, but the theme will be money.  The need for every ‘silo’ that exists in rugby in America to raise money.  And, the difficulties that surround the attempt to raise that money.

This was my 2nd NDS, I attended the San Francisco meeting in 2016 and was delighted to see people I had not met before my first NDS and got to connect like old friends in 2017 (after a year on Facebook, we all know each other, right?!?).  People like John Walker, Heather Harley, The Feury’s (Tom and KJ), , Karen Fong Donahue, Erik Geib, etc..are a few of the committed rugby administrators I met for the 2nd time at NDS.    Committed rugby people.

The venue of the meeting was perfect, all activities hovering on an open floor plan on the 5th floor of the Baltimore Renaissance.  Suffice to say, the bar next door to the conference venue did some solid business on the weekend.

I received a warm welcome from the USA Rugby staff as I picked up my name tag, and want to point out I was replied to within an hour on New Years Day by a staff member assisting me to fix a registration issue.

The buzz around the conference was fantastic. If you’re a rugby lover, you get to talk rugby (and only rugby) for basically as long as you are awake for a 3-4 day period.  Count me in!

The conference hall and displays were generally first class, and the vendors friendly, modestly aggressive (as any good sales person should be at a trade show!), and excited about future prospects.  There is a minor exception – I will explain below.

An Example of ‘Why attend NDS’…Rugby Utah meets Big 10

One of the benefits of a conference/tradeshow is for those who have the gumption to ‘put together business’ for whatever entity they represent at that show. I had never met Ken Rivera (Rugby Utah) or Ken Pape (Big 10 Womens Commissioner, Rutgers U, etc..) but had the opportunity to sit next to them as they exchanged real conversation about how the highly talented pool of Utah female rugby players could be better exposed to Big 10 Universities… The talk of running ‘combines’ for that purpose and partnering to bring teams/administrators together was inspiring.  It also emphasized to me how Embryonic we are regarding our stage of rugby regarding structure and national conscience.

Ken Pape (left) of Big 10 Women’s Commissioner and Ken Rivera (Rugby Utah) discussing getting Utah’s young female players more exposure to Big 10 Universities. This is why the NDS is invaluable and so important.

My agenda at this conference was specifically to meet congress members and discuss their thoughts on rugby in America, their opinions on my writings and casts, and assess their ability as individuals/collective to hold our Board of Directors to account for the follies that have occurred at USA Rugby over the past years. They have three jobs;  ByLaw Changes, Confirmation of Dues Increases, and holding the Board of Directors ‘accountable’.

The reason, this topic is ‘Bad’ and not in the ‘Ugly’ section of this article is that the individual members of congress are pretty much all great people in their own right…incredible passion, yet unfortunately by definition – absolutely powerless as an organization.  This is a problem.  A big one, and should be changed in the by laws to create leadership in this organization (not just a ‘representative to the board’), but a real leader who can martial fair opinion and take appropriate action when necessary.  Now is the time for action in the arena of ‘holding the Board accountable’.

My assessment from this meeting is there are very few congress members that by experience/resume should be able to grasp the severity of the leadership void. It’s just not in the nature of the job description of ‘congress member’.  Half of them are too young, others without senior professional experience, and some others without the real concern and vested interest for these particular issues (i.e., Board removal) or stuck in the way of mediocrity and can’t just seem to get out.

This is no indictment on any individual congress member, all the members I met with were open to discussing how congress is ineffective and has no power due to this lack of appointed/elected leadership.  Maybe it is Jeremiah Johnson’s job to assume this proactive leadership, the members I spoke to did not feel that was his role, or at least he has not been authorized such.

In each conversation at NDS, I often found I was discussing a topic other than the one that I came to look at.  Youth, Women’s, College, Clubs, National Teams, Conference/League administration, etc…and EVERY ONE of them is looking for money.  I want to call these individual groups ‘Silo’s’.  Every silo and every sub group of that silo is looking for money.  For example there is the youth director at USA Rugby I am sure could use more money, just as my friend Heather Harley is looking for money to fund her Fishers High School trip to Ireland in March (with over 100 people!!). Everyone is looking for money.  And it’s like we are all a bunch of people in a Charles Dickens movie with our hands out.

Mark Lambourne gave one of the best presentations on the weekend, “College Programs and Conferences: Challenges and Key Issues”.  What he is doing at James Madison University and the Chesapeake Conference is inspirational.  I was sitting in his presentation thinking, ‘if only we could do this at a national level’.  His most emphatic point was: 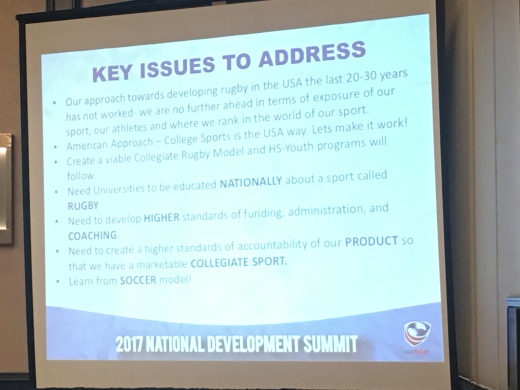 A card from Mark Lambourne’s Deck. Can anyone disagree with his first bullet point?

Our reliance on handouts has to be ok, for now – and thanks to the people I have come across and heard about (all of whom do not want their name mentioned) whom have literally dumped millions of dollars into USA Rugby over the years.  I had no idea the extent of individual and group donations that allowed our Olympic teams to train, travel, and attempt to compete in a modicum of stability and excellence.  But, we cannot rely on this.  We cannot rely on donations.  I would estimate the percentage of ‘revenue’ from individual/group benefactors is higher than anyone would consider ‘sustainable’ if one of the big donor’s walked away.  Even Dan Payne had his hand out in the recent ‘Q and A’, stating ‘we will continue to lean on the membership’ several times, and plugging the USA Rugby Trust on multiple occasions. These are good add-on’s but we should not be reliant on.

We must gain structure, and around that structure money can come.  People create structure. Structure allows the opportunity for sustainable revenue.

We must bring the silo’s under the same roof, aligned to a ‘greater good’ and trust that with an executed plan there will be more money than we can possibly imagine at this time. We are more powerful as a group than individually.

Note, I have not mentioned RIM in the conversation thus far. I was so underwhelmed with my conversations w/ Congress and RIM personnel regarding RIM and its golden child, ‘The Rugby Channel’.   Here is some math… I believe that the rights to Aviva Premiership on a live basis to USA would cost in the range of $400,000.   At $50/head for subscribers, TRC would need 8,000 subscribers solely to cover the cost for such an expense.  I believe the current number of subscribers is 7,000.  This math only computes for the Aviva Premiership example, but we need real content… what about Super Rugby, Tests, Top 14, Pro 12 (we have a little of that now thankfully), and the other competitions. It’s great to televise the USA Rugby stuff… but that will not monetize at this time, particularly with our competitions so diluted (i.e. Mens D1 College/Varsity Cup).

My math may be incorrect, and I assume a deal can be made to get 1/5th of the content of Aviva Premiership for the prorated amount (in this example, $80,000), but to obtain any real content over any extended period of time, it seems to me the costs will ALWAYS outweigh the revenue.  This is not to mention the salaries of The Rugby Channel employee’s and other costs.  Maybe we get ‘free’ content from England and Harlequins based on their RIM investments, but in the overall scheme of things, it’s mediocre.  Why are we paying to watch something with less quantitative and qualitative content than other providers we already pay for their bundled programs (i.e. NBCSN, ESPN, etc..) and also YouTube?

I realize these numbers are extremely ‘rough’ and cover only a fraction of what we might see on an Income statement, but the cost of content and operating costs must be a huge number compared to the number of subscriptions currently sold and forecasted.  I’d be glad to be proven wrong on this.

This entity ‘RIM’ which created ‘The Rugby Channel’ was created in the absence of any overarching plan by Nigel Melville and his ‘Board’, all of whom were obsequious to his every move.  And, we are paying for it now.  The Congress could have/should have taken control of this accountability deficit during the Melville years.  When we peel back the layers of RIM and TRC there is little substance.  Asking around about RIM, here is a quote I heard from a major sporting brands clothing maker regarding USA Rugby sponsorship:

“USA Rugby could not paint a picture that we could get our arms around”.

Clearly they don’t understand RIM either.

During my research, I have learned as much as I could on RIM, and the Rugby Channel.  My assessment is that we are going to spend big time resources (i.e. money) on The Rugby Channel.  I’d just like to get an explanation of how the math works.  However, if The Rugby Channel is where RIM is ‘counting it’s eggs’, I would have expected TRC to have a strong showing at the NDS trade show.  That did not appear to be the case: 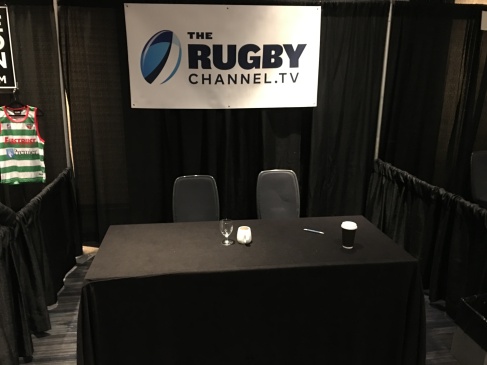 I walked the show floor many times. This is exactly how The Rugby Channel booth looked during the entire NDS. This is the entity RIM is counting on for considerable revenue.

We have no strategic plan.  My assessment is that at this time, there is little to sell on USA Rugby. What sponsor in their right mind (other than pure generosity) would get in bed with this brand at this time. Earlier this year, I spoke with a senior executive member of Harlequins about their RIM investment who stated, “We don’t really know all that much about it, but figure it is a good way to get our toe into the USA market”.  This is no way a company with a “$20 Million ‘valuation'” should be spoken of.

The plan is apparently coming, and apparently it is comprehensive.  We need it. And we need people to execute it.  We have Payne; I hope the Congress has the gumption to look at their duty to review the Board of Director’s performance, and assess that each and every member is qualified, capable and the best to assist Payne in taking this massive task forward.

These are my assessments of the Rugby NDS and the state of things in certain areas of American Rugby. You probably won’t see anything like this from any other Board member (exception Chad Keck, Will Chang) as they were not present.

My next article will consist of some suggestions that I hope will be contained within our strategic plan.

Other articles I have written on these topics include: