I don’t know Grant Cole.  We are ‘friends’ on Facebook, whatever that means.  l love his passion, think he has some whacky ideas (you’re friends confirm this Grant!), and I check out his stuff when he posts it.  I picture him as one of those diehard, meathead props, … the kind that buy 4 beers after the game and hangs out with his prop teammate, and the day’s opposing props altogether by themselves at the end of a long wooden bar, purportedly to talk “Prop Stuff”.

Grant, you have no idea what you’ve done!

Today, he posted something marvelous on Facebook that I doubt even he realizes will begin to shift the level of play (at least in ProRugby for now). He posted a picture of his rankings of each position in ProRugby based on the results of the first 3 weeks of play. 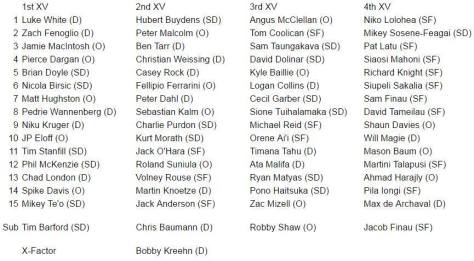 I had a conversation prior to the classic Australia-Wales battle at Twickenham last October with Mark Ella (Australian Grand Slam 1984 #10).  I met Mark by happenstance in what can be called my own personal ‘rags to riches’ rugby story. Suffice to say, I woke up that day not having a ticket and ended up 3 hours later at a catered event with Mark, Chester Williams, and the always entertaining David Campese (in a good way). We were discussing the state of the game in the USA (note this was just following the RSA-USA debacle a few nights before, so I was very fired up).  We started talking about media, and he told me a story about what happened in Australia as the game started to get televised to a national audience in the 1970’s.  He was clear as day in saying the quality of Australian Rugby exploded after the game started being televised.  He said there was literally nowhere for the players to hide. Their friends and family could see them, as could coaches and selectors – without having to be at the match. Apparently the level of player improvement, particularly surrounding fitness because of the ‘faux-competition’ created by the media.

He said the 1984 Grand Slam Wallaby win was a direct result of TV showing games in the mid-late 1970’s.

In the same vain, I think Grant has started something that can be used to create a buzz around the players and the league. This will draw more attention to the league. Already on Grant’s post there is fierce debate over his ratings, and the level of play.

I’ve been there. If I was one of the 60 names on that list there is no question I would dig just a little bit deeper to become #1 on the chart, and god forbid on the 4th XV.  The legend himself, Mark Ella confirmed the same, so I consider myself in good company.

Grant, you now have a responsibility!

You are the tip of this spear regarding publicized player ratings.  Keep going.. figure out how to publicize it formally… but be fair and just in your ratings…you know how it works in other pro leagues, .. we all make judgements based on media.  You have just assumed an enormous role.  We know you’re up for it. Great job!

Other ‘rugby playing nations’ (Tier 1, whatever…) have all this in place, and take it for granted by now. I hope to see some surge in the Pro level (and ultimately pushing our Eagles higher) based on this and other factors, such that we accelerate against the top teams, not regress as we have for quite some time.

Every person at each level they engage in rugby can push themselves a little harder, and push their teammates, their players, their administrators to engage in ‘the professional-professional era’.  The net effect is that one day, this post by Grant on Facebook might help a player push that 0.1%harder. The net of that is that down the road, the US Eagles make the Rugby World Cup Quarterfinal.

You know where I am focusing.  Well done, Grant