I have always thought ‘Wall Street’ was one of the all-time great movies, not only for enjoyment but as a business movie. There are some great principles to be learned (and also several to be avoided; i.e., Greed is actually not good), but one of the lines I thought is great was “Wake up Buddy boy, Money Never Sleeps”.

My wife runs an event business on our farm, and this year she has initiated a Country Christmas Event starting the day after Thanksgiving.  At 6’6” and a deep voice, I was the clear favorite to be ‘Santa’ for these days.  This would mean taking a few Friday afternoons from my ‘day job’ in the chemical business  at TRInternational, Inc where I am enjoying my new role as full time trader and salesperson (see my blog posted earlier).  November 29 was to be my first day, and suffice to say I had a lot of business stuff on my mind.

This Thanksgiving, there has been need for me to work with a new hire and I updated my status to the company as “Money Never Sleeps, not even on Holidays”.  I thought that was pretty clever.

As a devoted husband (lest the consequences of not accepting my Santa appointment), I dutifully showed up in my Santa gear to my appointed post at 11 a.m. the day after Thanksgiving.  I really wasn’t that into it… until… the first child noticed that Santa had come out and reacted like I was the Good Humor Ice Cream truck rolling down the street… “Santa’s here, Santa’s here…”.

The day progressed nicely, I took pictures with children in the appointed seat, and was able to amble around the farm taking spontaneous shots with children and family.

I was about to go in on a break when one of our friends who runs Peyton’s Ranch & Comfort Critters said that a terminally ill boy was visiting and so excited to see Santa and Bunny rabbits.  Let’sjust say (in the modern vernacular), “things were about to get very real” for me. I walked to the front of the farm, not knowing what to expect…and this exceptionally happy boy named Jerry came running into my arms.  He is standing to the left of me in this picture, and he began to tell me about the long eared rabbits he was excited to see and how much he loved animals. 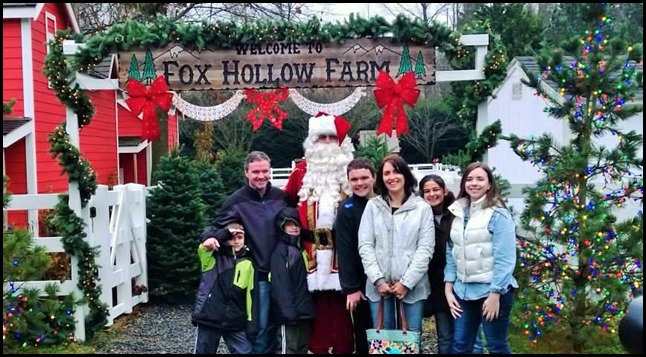 I was able to walk with him onto the farm and show him around, I commented to him how tall he was for an 11 year old  He replied ‘well, I have something wrong in my head, and it causes me to be so tall, that’s why I am a ‘Wish’ child’. Suffice to say, I had little to reply to that, and was floored that he was so open, accepting and resolved. We took a few more pictures, and I waved goodbye wishing him well (not even really understanding what that meant).  Later, I told my wife how amazing it was to meet such a positive, inspired boy and she said…’yes, this will be his last Christmas’.  I was floored.

Only a few hours before, I was actually bothered that I had to ‘work’ as Santa that afternoon.  I had an opportunity to create a small portion of joy for this wonderful boy.  I felt horrible about my selfishness, and resolved to re-think my attachment to certain things.

Perhaps “Money Never Sleeps”, but on this day it sure took a rest in my mind.

Merry Christmas everyone!  And lets remember what is really important in life.  Thank-you Jerry for teaching me something very valuable.