I had a very unique rugby experience this past New Year’s weekend in the UK.   Former USA Eagle Captain (famously selected as an American to Captain the esteemed Bath Rugby Club), Dan Lyle introduced me to several people at both Bath and Leicester prior to their home matches against Exeter and Saracens respectively on New Year’s Eve and New Year’s Day.  I had little idea what to expect,  and simply hoped to get a seat under cover each day.  That said, I had no idea I’d be sitting/socializing with the top brass/Directors from each of the four clubs I would see play.  I quickly recognized it was time to take on the role of an ‘Ambassador’ for American Rugby.

After arriving at Bath on the Saturday afternoon and spending time with their Directors and several players, out we went to watch the match.  Watching the Aviva Premiership competition on NBCSN this year has been fantastic, and one of the things I look on w/ amazement is the commitment of England’s Head Coach, Eddie Jones – he attends at least two matches per weekend thru the entire competition, allowing him to witness his players (both current and future) in person to get that unique in-person perspective.   Sure enough, just as I sat down – who but Eddie Jones walks up the corridor approaching my aisle.  Shamelessly, I asked him for a picture and thought that would be the end of seeing him, and make for an entertaining picture for friends on social media.

My family spent a wonderful New Year’s Eve in Bath, and were up early the next day to travel back to London, and head up to Leicester for their match v. Saracens.  Arriving at Welford Road, we were greeted by the most hospitable staff I have ever met, and were directed up to the Director’s Lounge for a pre-game meal and some socializing.  Thanks once again to Mr. Lyle for setting up the entire arrangement.   I chuckled to myself as I saw none other than Eddie Jones nametag at Table 1 next to mine.

He would think I’m stalking him.  When he walked in, we caught eyes, and he came over and immediately introduced himself and inquired what an American was actually doing in both Bath and Leicester on back to back days.  We had a nice conversation, and I was very impressed with his humility and engaging personality – having thought slightly different of him watching only the seemingly controversial media interviews he’s done this year surrounding England’s new found dominance.

At the halftime break in the lounge, I caught up with him again and knowing I would never have another chance, and running out of time asked him the following question:

“Coach, in 30 seconds or less, could I get any thoughts on rugby in America”

After he left for the 2nd half, I whipped out my notebook and furiously wrote notes of our conversation.  Here they are: 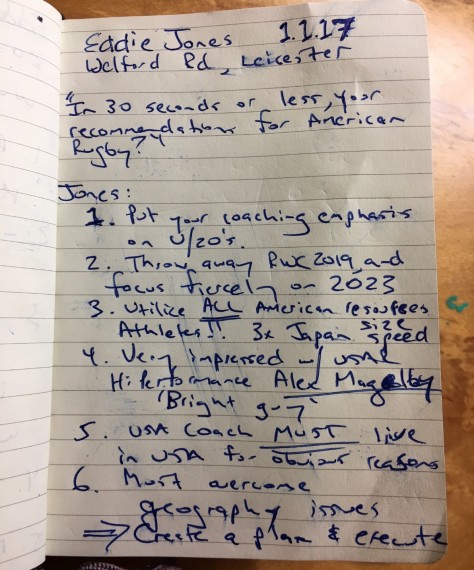 As he walked off, I literally couldn’t believe he uttered those words literally in less than two minutes.

My Assessment of Eddie Jones Comments

He makes a convincing point that our top coaches should not necessarily be focused on the ‘adult’ game, but move a notch younger to that of U/20’s.   He was clear – Make the U/20 World Championship a huge priority, go win the trophy.  He was clear you could take players of American athlete caliber and create international success in several years – only if developed as early as possible.  His comment about ‘get your top 20 colleges funded’ interests me, but I thought it profound coming from this man.

I’ll acknowledge some huge successes in the U/20 space in the USA this week.  First, all reports are that Salty Thompson and his crew did a phenomenal job wrapping up last week’s High School All-American Assembly (160 kids), on the same week his best varsity players were facing Canada’s U/19’s – a match won by the USA!!   Salty’s work over the years has been nothing short of tireless for two decades, and the older generation should smile at the photo below – indicating how far the game has actually come in the country in terms of numbers and parochial organization.

I’d like to note that the High School camp was attended by USAR CEO Dan Payne.  What a great commitment he is showing to the job.  As a father who spends too much time away from his family, we should all recognize the travel Dan does is a true sacrifice. Great stuff from a committed leader. He deserves to work with “A Players” at every level of his dealings.

I’ve always thought we need an 8-10 year plan.  However, it has to actually start sometime…we are only 15 months removed from RWC 2015 and from my seat, very little has been accomplished to attempt to create sustainable success at the world level.  We still have no overarching Strategic Plan, have created an embarrassment of biblical proportions for American rugby with the PRO Rugby debacle, and have completely underperformed at the international level, having set a World Rugby record for ‘ranking differential’ in our loss to Brazil (and subsequently Uruguay) early in 2016.   All the hard work our rugby community is putting in is diluted in the absence of an overriding aligned direction of the rugby community.

I was delighted Jones holds USAR’s High Performance Director in such high regard.

USA Rugby Head Coach MUST live in the USA

Part of this conversation consisted of my praise for him and his commitment to spending time with each and every one of his players, witnessing them in person as often as possible.  I mentioned the USA coach resides in Pietermaritzburg, South Africa and flies in for camps/competitions, etc…  He then made his comment about our coach MUST reside in the USA, a comment that I have echoed in several previous articles.

Coincidentally, Saracens and England hooker Jamie George was interviewed in Jan 2 edition of The Guardian.  Here is an excerpt:

Do (Coach Eddie) Jones and (England forwards coach) Borthwick keep in touch with him outside of international matches?

Here is Jamie’s reply:  “You get texts here and there but in camp they talk about games you played four weeks ago. So you know they’re always watching and you want to impress them every week.”

This is an England international, with good chances to visit New Zealand this summer with the British Lions, talking about how he (and other players) raise their level when the coaches are in the stands at their local games.  For me, this should be a mandatory function of the USA Head Coach…always helping to assist the growth and culture of the game in the USA.

Perhaps my largest point of contention regarding top level rugby in America is the fact we have no top tier competition for our players to compete week in/week out against each other.  In a previous article, I noted that all 23 players selected to play Romania this fall for the USA came from different teams/organizations (with minor exception for the USA 7’s players).  The matches I witnessed this weekend offered 10 capped players competing with/against each other on the field in each game.  It is no wonder that Tier 1 keeps getting better and the USA continues to fall behind.

His comments about geography are well noted, and this was echoed in a big way by the Bath M.D. Tarquin MacDonald who perhaps said it best… “In the USA, you are a continent, not a country!”.  This is certainly an issue, but must be one that our Board and CEO can work together to create the space for such a top tier competition.

Leicester v. Saracens.  Note the number of international players competing against each other (every week!)

Rugby Knowledge at the Board level

Jones’s final comment about ‘create a plan, and execute’ is one that is the essence of all my writing to date since RWC 2015.   To this end, we need ‘rugby minds’ on the Board level, to work closely with CEO Dan Payne and get USA Rugby at least starting with a unified, and aligned vision.   My conversation with former Leicester and British Lion, Rory Underwood (now a 9 year Director at Leicester) generated the same result.  At the embryonic stage of our Union’s structure, he completely complemented Jones thoughts on the unique requirements of ‘rugby knowledge’ and all the other qualities a Director must have on a Rugby Board.

This falls on Congress. Failure to exercise the Bylaws related to the removal of non-performing Directors is no longer acceptable. While the opportunity has been squandered by previous (and several current) Directors, the Congress must be active and more faithful in its role as representatives of the members

I used the word ‘ambassador’ above.  I really felt that way.  It was fantastic to experience the pinnacles of European Club Rugby and get a vision of what we could aspire to in this country.  I believe it can happen.  There are many who do not.  It will take huge leadership and courage on behalf of the CEO and Board at USAR.  It will take holding people to account on performance metrics… big time professional stuff.  Key word: Professional.  At every level.  I would recommend that each USA Rugby Board member embark on a trip like this to enhance the rugby knowledge we desperately need at that level.  Every Board member should act as an ambassador for USA Rugby.  My thoughts are well documented on the grade I would give our current members.

Thanks again Dan Lyle for creating the opportunity for this epic once in a lifetime experience.

Meeting Eddie Jones 2nd day in a row.  This time at Leicester, and so delighted to experience this with my son, Harrison.

A final note on my Leicester experience:

While the experience at Bath was incredible for an entirely different reason, I want to acknowledge the incredible passion and pride present throughout everything that occurs at Leicester Rugby Club.  From the moment we walked in to the beautiful lobby with a trophy case that any team could be proud of, the level of service was nothing short of world class.  Every person made my family feel like we were the most important people at the match.  Other guests commented the same to each other.

I like the dreams of the future better than the history of the past.  Thomas Jefferson

Other Articles I’ve written on these topics: